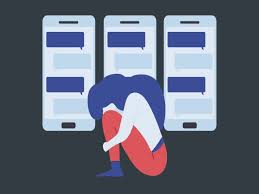 Bullying in the Cyber Community

Internet is used by the entire community across the globe for various purposes. The purposes range from recreation, research, or even social communication. The internet and mobile phones assuredly have positive potential to convert an individual's life for the better. Still, when they are misused, they can cause real trouble. The covid era has substantially increased the use as well as misuse of the cyber world.  Bullying which was used primarily among school students has taken its toll in the cyber world in the form of Cyberbullying. When someone is attacked physically or mentally to harm his self-esteem it is considered bullying in the physical world. Cyberbullying uses electronic communiqué to bully a person, typically by sending messages of a daunting nature. Cyberbullying is using or sharing of negative comments or content about a person in the cyber world. The information shared to cyberbully may be in the form of photographs or posts that hold wrong or negative information about the person or the views held by a person. The bully aims at annoying, confusing, or upset the targeted person and they expect the target to react emotionally. The emotional stress of bullying backfires on the victims in the form of abridged concentration in studies, depression, developing anxiety, lowering of self-esteem, etc.

Different classes or types of cyberbullying include denigration (sending out a wrong or cutting message about a person to others), Masquerading (pretends to be someone else and sends out degrading messages to contacts), or even Exclusion where a person is deliberately excluded from a social circle like WhatsApp group. The most common way of bullying is Trickery where an individual is convinced to share sensitive and private information and disseminate this information to others. Trickery is a punishable offense under the IT act of IPC.

We commonly hear complaints about someone accessing a person's social media account or duplicating one and sending out requests for help or money. Fraping is thus, ruining the reputation of the victim. The most commonly created trolls are also an attempt to bully by provoking the victim to respond. Catfishing is recreating social network profiles by signing up for services in the victim's name and using it for deceptive purposes.

Recently incidents of middle-aged educated females being persistently contacted over their social media accounts from anonymous contacts are heard. These communications are a form of cyberstalking that starts with a friendly nature and eventually leads to threats, defamation, sexual harassment, etc. Studies across students of different age groups reveal that the bully is often a stranger but alarmingly may also be a friend or acquaintance of the family. Not very rarely it is seen that a current or former boy or girlfriend or even sibling turns out to be a bully.

Every victim should be given adequate cyber protection as well as psychological support to overcome the trauma of cyberbullying. Those scenarios that are punishable under the law must be taken up legally. Starting from school, kids must be supported and guided from bullying. Though we discuss cyberbullying being prevalent among school children, it is more than an adolescent issue now. People of all age groups and sex are being bullied in one form or the other in the cyber environment. Bullying must be acted upon with proper legal actions against the bully.